Johnny Got His Gun by Dalton Trumbo

Exploring an unusual perspective, Dalton Trumbo writes an uncommon anti-war novel that poses questions we, or at least I, never thought to ask: Why have we fought the wars we have? I think everyone has a different answer. This book explores the mind of a young man who was severely wounded in battle, and finds one way to address part of the question.

A young man named Joe gets his arms, legs, and face blown off during World War I, leaving him without ears, eyes, a nose, or a mouth. He doesn’t know where he is and, with nobody to talk to, hear, see, and nothing to taste ( he’s fed through a tube), he’s completely alone with only his consciousness for company. His mind wanders to all the memories of his past: happy ones and dark ones. He continually imagines what it would be like to see his loved ones again.

Trumbo incorporates Joe’s life into his memories, which I appreciated because then I could get to know the character and not just his thoughts. He makes readers feel as though they’re in Joe’s position: a man stuck in a place that’s nothing like life—and feels so close to death. Trumbo helps his readers imagine darkness until you die, never to see, hear, talk to anybody ever again—nothing to taste or touch. He describes all of Joe’s emotional changes from panic to joy, and the realization that obviously he can’t get new body parts, so he must use what he has. Trumbo takes his audience on a journey to the realities of war and all its consequences.

Trumbo disguises his powerful, but intriguing, anti-war protest with an even better story. When reading this novel, I couldn’t help but think back to past wars and also current events. He wrote in a way that I could see Joe change: for example, by starting to treasure his memories instead of blocking them out, and thinking of how to use what he has, rather than panicking about it. Johnny Got His Gun is based around a simple theme: the complicated reasons we fight wars and the powerful effects they have. This famous book was made into a movie that Trumbo directed, which I haven’t had the chance to see yet. It was also a National Book Award winner.

Johnny Got His Gun is an amazing read that will interest lots of readers looking for a different perspective. I highly recommend this powerful novel. 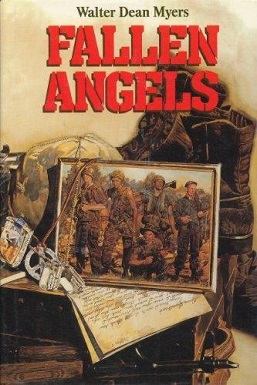 Imagine that it’s the middle of the Vietnam War, and you’re in the center of it. That’s how it was for Richard Perry in Fallen Angels by Walter Dean Myers. Richard is sent to the wrong place accidentally. He was supposed to go into a shipping company that works for the Army, but instead he ends up right in the Vietnam jungle in the middle of the war. While he’s there he makes friends with another guy in the Army whose nickname is Peewee, and the rest of the novel explores how they are trying to survive the war and how they are able to sustain their friendship.

I really liked this book because it had a great lead that included all of the background information that is needed to understand the whole plot. I also liked it because in some war novels the author gives away too much, which makes the story predictable. Myers kept it unpredictable by making readers figure out some things for themselves. I also really liked how Myers introduced each character at his own time and with his own story. For example, when Peewee is introduced they talk about where they come from and why they joined the Army. It is enough that you get to know each character without it getting too confusing. I also like how Myers gave each character his own background story.

I appreciated that Myers gave Perry problems that anyone in the Army could face. I liked this because I thought it made the book very realistic. Ulitmately, I enjoyed Fallen Angels for the plot and also for how well-developed the characters were.

If I Should Die Before I Wake, by Han Nolan

This book is about about a troubled girl named Hillary, a contemporary American who hates Jews.  Hillary has always felt out of place socially, but now she has joined a neo-Nazi group in her small town, and she has a skinhead boyfriend. Finally she feels like she belongs, until she gets in a serious motorcycle crash and has to go to a hospital, where she drifts in and out of a coma.  Her roommate is an elderly woman named Chana, who is also unconscious.  While in the coma, Hillary becomes Chana as a young Jewish girl trying to survive in the midst of Hitler’s invasion of Poland.  While Chana/ Hillary endures the horrors of the Holocaust, Hillary begins to understand the errors of her ways.

I rated this book a perfect ten out of ten because of the dialogue, the superb character reflection, and its theme of tolerance.  It’s one of the best books I have ever read.  An author that I would compare Han Nolan to is Eli Wiesel, because his memoir, Night, is about the same topic, and similar things happened to Eli that happen to Chana. His book is also fantastic.

The narrative voice is in first person for both Hillary and Chana.  I think it makes the book powerful, because I could get inside both of the main characters’ heads, think the way they are thinking, and feel the way they are feeling.  The visual descriptions are also good and so haunting.  Nolan goes into depth, showing what corpses looked like piled up on top of one another and what those still alive in the death camps looked like as well.  The descriptions were so vivid that they gave me nightmares. The dialogue felt realistic, too.  It was the kind of language they would have been using back then.  Nolan makes her characters come alive through their conversations.  For example, the thick Yiddish accent of Bubbe gives her a strong character that I believed was real.

Hillary’s character development is one of the best I have ever read. Over the entire book she develops as a person. When she’s in the coma and each time comes out of it, she realizes a little more how awful her anti-Semitism is.

Every time I picked up this book and started reading it, I couldn’t put it down again. It really made the movie inside my head and made me want to keep reading. The conclusion of If I Should Die Before I Wake satisfied me because it revealed all of the little mysteries that Nolan kept hidden. After I finished it, I felt like it was complete. It ended so perfectly— on a note of hope.