A Heartbreaking Work of Staggering Genius, by Dave Eggers 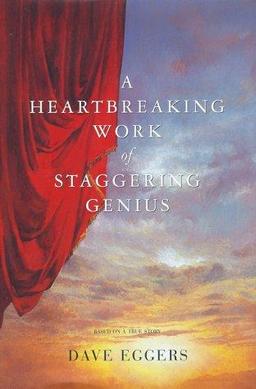 A Heartbreaking Work of Staggering Genius (A.H.W.O.S.G.) is a breath-taking—literally, Dave Eggers’ lack of punctuation occasionally made it hard to breathe— and brutally honest memoir. A.H.W.O.S.G. is a memoir of the years after Eggers’ parents’ deaths. Immediately following his mother’s death, an enigmatic Eggers, his reckless sister Beth, and willing-to-go-with-it-because-he’s-sort-of-not-really-oblivious- brother Toph move from the suburbs of Chicago to Berkeley, California. The family bounces around houses, Toph goes in and out of school, and Eggers blows his brother’s social security money to start a magazine, but besides that they live a life just like yours or mine. Yes, I swear it’s a memoir.

Eggers’ most dynamic feature is his tone, however irritating it may become. It’s abrupt; it’s weary; it’s exasperated; it’s exhausting.  After one hundred pages of this, your brain feels as though it’s going to turn off. His mind is a blur of worrying about the worst, arrogance, optimistic pessimism. His mind is beleaguered, and he’s terrified at the thought of death. He distracts himself; he needs constant action, constant noise. Whenever he’s in the car the windows are down, the music is all the way up, he’s playing word games, just something, anything, that isn’t death.

After tone, Eggers’ biggest asset is his honesty—however it makes him look. He was brutally honest throughout the book; it felt like a novel because he was viewing and talking about himself as an imperfect human, which most memoirists fail to do.  He wasn’t constantly striving for the best for him and his family, he was admittedly and happily procrastinating. Eggers would scoff, ridicule people for acting with the very traits he himself possessed. He didn’t think that he was better than others, or that he did not possess the negative traits he saw in them. He knew he was a hypocrite, and he loved it. He knew there was no other way—that is just the way humans are, so he embraced his hypocritical self.

This brings me to theme.

I think that there were two major themes in this book. The first was this: all humans are fundamentally the same. All humans are flawed, we are shallow, we are arrogant, and we are hypocritical. Some disguise it more than others, but like or not, that is who each of us is. The second and more prevalent theme to emerge from this book is this: don’t run from death. Don’t try to escape it all your life, because it will find you, and when it does you can’t escape, so you are better off embracing and coming to terms with it.

I would rate this book a nine, simply because Eggers was so honest, and consistent with his tone that he started to irritate me. The person he was describing as himself was very un-loveable, and spending four hundred pages in his frantic mind started to exhaust me. It didn’t make the book unbearable; it was quite good, just not a ten. I would recommend this to people who like character-driven books, and books about the human  experience that provide realizations about what or who we really are.

Overall, A.H.W.O.S.G. is good-but-not-great, kind of like Eggers’ view of life. It is an unbelievable memoir, and definitely a worthwhile read.